I have been meaning to post this for ages but it’s really that silly time of year where so much is going on!

Every once in a while, I go on a bit of a “competition” frenzy and enter a whole lot of competitions. I don’t even remember when I entered this competition, but on my birthday, I got an email saying I had won some tickets to an Elmo concert!

Even a year ago, it was difficult to get Jacob to sit still for an extended period of time. He never really sat and watched things til he was about two years old, and even so, he prefers to get up and fidget about. But now that he’s three, he certainly has matured quite a bit and my winning comment was actually along the lines of “I’d love to win this because my son is finally old enough to sit still for a concert like this!”

So anyway, off to the concert we went – just me and the kids! Hubby was supposed to join us but had some last minute commitments he couldn’t get out of. I was a bit nervous taking two of them on my own but I also was comforted in the fact that it’s a kids concert – so even if my kids were making noise, they’d certainly not be the only ones.

We parked a bit of a way away and had a trek along the Torrens to the Adelaide Festival Theatre, which I think contributed to our success as Jacob could get a bit of the running around out of his system. Before the concert, it was a bit chaotic as I let the two of them loose (to run/crawl around in the foyer) and Jared kept attacking the posters to a point that he knocked some pull-up banners over as I was trying to tell Jacob to stop playing with some retractable barriers. Oops.

But fortunately for me, the kids were great in the show itself. Jacob was a bit too light for the seat (it was one that flips back up) so I had to hold it down with my leg or it folded up on him! And I kept Jared in my Tula for a lot of the time – babywearing has been my new obsession – and he fell fast asleep. 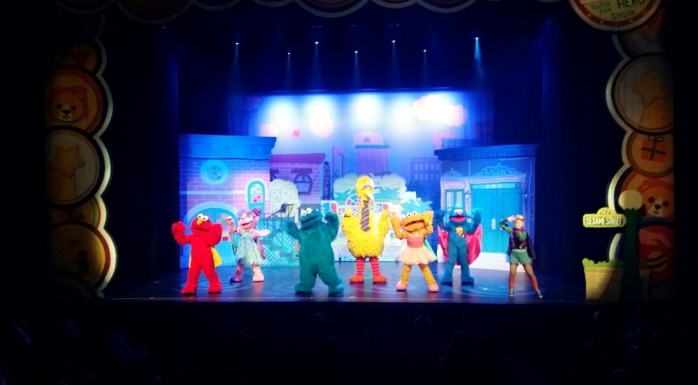 Jacob was genuinely intrigued when Elmo and his crew came out. He isn’t hugely into Sesame Street but he does know some of the main characters – his favourite is Cookie Monster, of course! Jacob likes to sing “C is for Cookie, that’s good enough for me”.

But we really enjoyed this show – relatable characters and good moral theme to become a superhero by being kind to others. I look forward to seeing more concerts with the kids – maybe the Wiggles or Playschool or even Mister Maker. What concerts do you recommend for preschoolers?

Anyway, I hope to post a bit more over the school holidays and share little snippets of our lives. Enjoy the weekend!